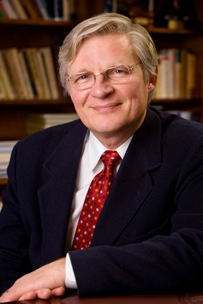 Peter Lilback, who is the president of Westminster Theological Seminary, is part of a conspiracy to lead Christians into moralizing America through civil law. It is a movement that brings protestants under the influence, and ultimately the leadership, of Papal Rome, which offers its assistance as a civil power. The movement is led by “prominent Christian leaders“, such as Chuck Colson, J.I. Paker, James Dobson, Billy Graham and many others.

Lilback’s method of deceiving Christians into believeing that America’s forefathers were Christians, is done through is books and lectures on the life and writings of the founding fathers. It portrays them to be something which they were clearly not. The article entitled “Cross Culture on Peter Lillback’s ‘History’ ” provides examples of how Lilback has been making a practice of wrongly applying Scripture to the deeds of the founding fathers. Thus showing how Lilback has made himself one of the well know “authors of confusion” in the church, since most of the founding fathers were not true followers of Jesus Christ, but Freemasons, which are the opposite of Christians, since they worship Lucifer as their savior.

“Masonry, as such, and according to its original plan, appears to be founded on natural religion. Hence the institution is found among all nations, who believe in one God, and the accountableness of man to him, as a moral agent, and an immortal being.”[quoted from Peter Lillback’s “George Washington’s Sacred Fire,” p. 505]

“Lucifer, the Light-bearer! Strange and mysterious name to give to the Spirit of Darkness! Lucifer, the Son of the Morning! Is it he who bears the Light, and with its splendors intolerable, blinds feeble, sensual, or selfish souls? Doubt it not!” [Albert Pike, Morals and Dogma of the Ancient and Accepted Scottish Rite of Freemasonry, p. 321, 19th Degree of Grand Pontiff]