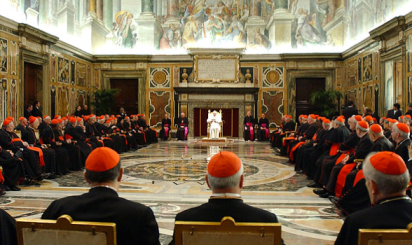 Rome’s engineering of communism, and social justice, over the last 300 years, reveals the hidden agenda within its campaign for global governance. The popes desire to offer the world a peace & prosperity plan that appears to be for the common good of mankind, when it has nothing to do with peace, and common good, and everything to do with deception and tyranny. Rome’s approach to winning the confidence of the world is the “Hegelian dialectic”, which creates opposition, and chaos, so that it can offer a solution that appeals to both sides of the opposition; thus producing a third way, in which everyone agrees on a compromise that works in favor of Rome, which manipulated the conflict from the beginning.

Rome’s participation within economic conflict can be seen below:

Does the Vatican’s new document calling for a “central world bank” and a “supranational authority” to advance the common economic good mean that Pope Benedict supports the complaints behind the Occupy Wall Street movement?

But a debate over the authority of the document, and the requirement (or not) of Catholics to support it, is now being waged by some of America’s most prominent Catholic writers, scholars and activists.

You can read the full text of the document, Note on financial reform from the Pontifical Council for Justice and Peace, in the embed below. Among the findings are calls for:

— A “world political authority” to manage “the growing interdependence between states and regions of the world becomes more and more obvious as well as the need for answers that are not just sectorial and isolated, but systematic and integrated, rich in solidarity and subsidiarity and geared to the universal common good”

Thomas J. Reese is a senior fellow at the Woodstock Theological Center at Georgetown University, and a former editor of America, the national Catholic weekly magazine.

The Vatican released a document on the world economy on Monday that will cause heartburn in the Tea Party, but will be cheered by the folks occupying Wall Street. 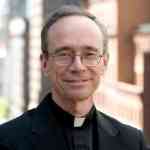 marriage. But when it comes to economic justice, Pope Benedict XVI is to the left of President Obama. Heck, he is even to the left of Nancy Pelosi.Those who read the pope’s 2009 encyclical “Caritas in Veritate (Charity in Truth)” will not be surprised by this new document. In that encyclical, the pope decried “corruption and illegality” among economic and political elites in both rich and poor countries. He told financiers they must rediscover the ethical foundation of their activity and stop abusing savers. He wants a radical rethinking of economics so that it is guided not simply by profits but by “an ethics which is people-centered.”

Benedict notes that economic “inequalities are on the increase” across the globe. He does not accept the trickle-down theory, which says that all boats will rise with the economic tide. Benedict condemns the “scandal of glaring inequalities” and sees a role for government in the redistribution of wealth.

Yes, you heard that right. The pope favors the redistribution of wealth. When was the last time you heard a liberal Democrat use those words?

The pope also disagrees with those who believe that the economy should be free of government regulation. An unregulated economy “shielded from ‘influences’ of a moral character has led man to abuse the economic process in a thoroughly destructive way,” he writes. This has “led to economic, social and political systems that trample upon personal and social freedom, and are therefore unable to deliver the justice that they promise.”

Critics have complained that the Occupy Wall Street movement has no program. The people in the movement could do a lot worse than to study what the pope has said about the economy. Sadly, few Catholics know of the church’s teaching on economic justice, which has been called the church’s best-kept secret.

The pope does not have a magic plan to restore economic prosperity, but he does focus on the values that a political and economic system must support. The priority, he says, must be “access to steady employment for everyone.” And that means not just here in the United States, but also in the developing world, where we must rescue “peoples, first and foremost, from hunger, deprivation, endemic diseases and illiteracy.”

So if you are having a tea party, don’t bother inviting the pope; he won’t come. But if you see a white, solar-powered car heading toward Wall Street, it might just be the popemobile.

VATICAN CITY (CNS) — The world authority envisioned by two popes as a way to ensure global peace and justice would not be a superpower, but primarily a moral force with limited jurisdiction, Pope Benedict XVI said.

The pope made his remarks Dec. 3 to a plenary session of the Pontifical Council for Justice and Peace, which was scheduled to meet for three days to discuss the theme of “political authority and global governance.”

In his address, Pope Benedict recalled that Blessed John XXIII had called for the “construction of a world

community, with a corresponding authority,” to serve the “common good of the human family.”

The pope also cited his own 2009 encyclical “Caritas in Veritate,” in which he called for a “true world political authority” to ensure international cooperation, peace and environmental protection.

The church offers “principles of reflection, criteria of judgment and practical guidelines” for such an organization, but no concrete legal or political recommendations, Pope Benedict said in his address.

Yet the pope stipulated that the proposed body would not be a “superpower, concentrated in the hands of a few, which would dominate all peoples, exploiting the weakest.” The authority in question, he said, “must be understood, first and foremost, as a moral force, a power to influence in accordance with reason, that is, a participatory authority, limited by law in its jurisdiction.”

The council’s president, Cardinal Peter Turkson, told Vatican Radio that the agenda for the plenary session would include the topic of global financial governance as a response to the world financial crisis.

In October 2011, the council called for establishment of a “central world bank” to regulate the global financial industry and the international money supply as a step toward the world authority envisioned by Blessed John and Pope Benedict.

“The man of today is considered primarily from a biological point of view, or as ‘human capital,’ a ‘resource,’ a cog in a productive and financial machine that dominates him,” the pope said.

“New ideologies — such as the hedonistic and egoistic one of sexual and reproductive rights, or that of a disorderly financial capitalism that transgresses politics and dismantles the real economy — contribute to make the employee and his work seem ‘minor’ goods and to undermine the natural foundations of society, especially the family,” he said.

The conflict is capitalism vs. communism, and the compromise/”third way”, which is Communitarianism, which is a merging of capitalism & communism. Communitarianism is consistent with “Rerum Novarum – Catholic Social Teaching“, because it takes away from the individualism of capitalism by stressing the importance of  individuals being within, and contributing to the common good of the, community. The community that Rome has in mind is “the world”.