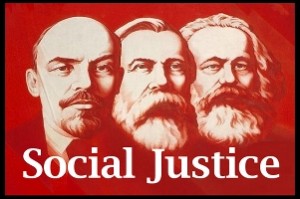 The oldest report of communism can be found in the writings of the Greek philosopher, Plato, and has been both implemented and perfected by the Jesuit order of the Roman Catholic church. The resurrection of communism took place in Paraguay of South America in the 17th, and 18th, century, in what is known as the Jesuit Reductions of Paraguay. The Jesuit Reductions were brought about because of Romes interest in making Catholicism the dominate religion of the indigenous region. At the same time, the Spanish colonies were enslaving the natives, and no conversions to Catholicism were taking place, nor were their any clergymen who spoke the language of the natives. To solve this problem, the Jesuits decided to employ radical conversion tactics to win over the natives to the religion of Rome, such as promising freedom from slavery, and equal status with Spaniard colonists, if they would agree to convert to Catholicism.

Within a short time, the number of converts numbered in the tens of thousands, and continued to grew exponentially. These converts lived in colonies controlled by Jesuits, who enforced communism as their form of governance. This fact is also affirmed by Roman Catholic history, as stated below:

The economic system of the Reductions

The economic basis was a sort of communism, which, however differed materially from the modern system which bears the same name, and was essentially theocratic. “The Jesuits”, writes Gelpi y Ferro, “realized in

their Christian commonwealth all that is good and nothing that is bad in the plans of modern Socialists and Communists.” The land and all that stood upon it was the property of the community. The land was apportioned among the caciques, who allotted it to the families under them. Agricultural instruments and draught-cattle were loaned from the common supply. No one was permitted to sell his plot of land or his house, called abamba, i.e. “own possession.”

The communist regime of the Jesuits has also been affirmed by the following author:

The Revolutionary Movement – A Diagnosis of World Disorders by J. Findlater (1933) 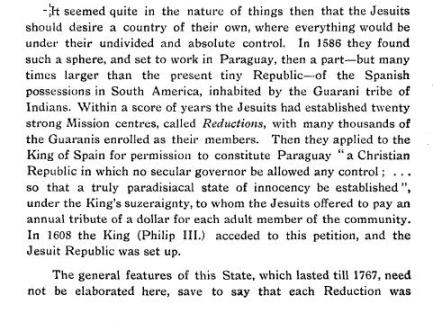 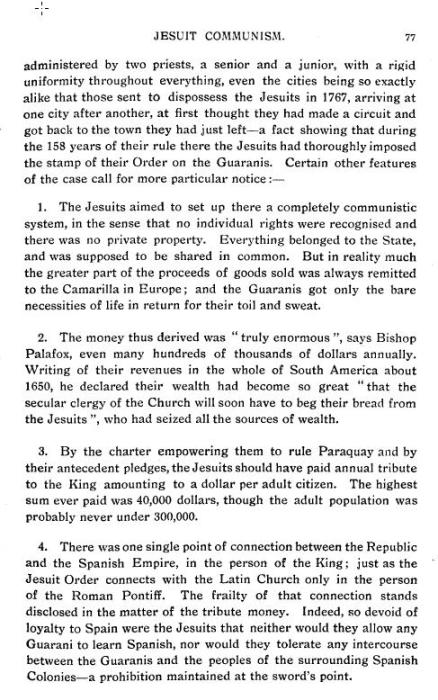 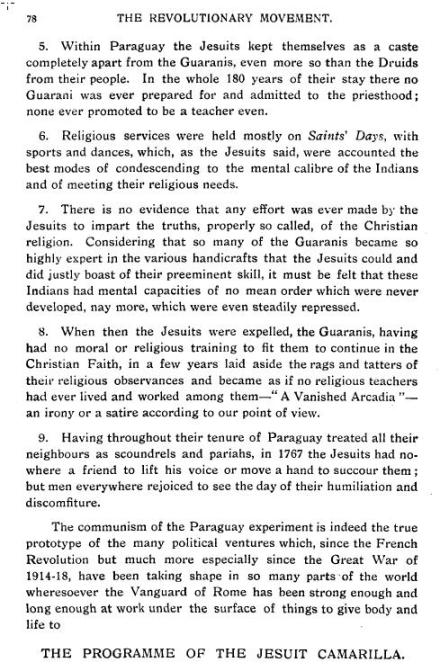 When once the Jesuits had raised up a generation so devoted and obedient, they then brought into operation their system of government, and made a successful attempt to realise that republic preconceived of old by Plato, and which, with perhaps more interested views is held out to us by the Socialists of our own day. In fact, their form of a republic was nothing else than that Communism which the famous Cabet is now trying to establish in nearly the same regions; the only difference being, that the Jesuits substituted themselves for the state or community.

In the 19th century, the Jesuit philosopher, Luigi Taparelli, who coined the term “social justice”, implemented the philosophy of Thomas Aquinas to be the voice of Rome in regards to the social changes that were taking place. Taparelli’s writings heavily influenced Pope Leo XIII’s 1891 encyclical, Rerum Novarum, which was an open letter that addressed the condition of the working classes, and amounted to the affirmation of socialism, as opposed to the traditional approach to communism, wherein private property is excluded.  Out of this Catholic Socialist’s philosophy has come a theology of work, which is currently being taught to Roman Catholics in the West. For more information on Rerum Novarum, click on the link entitled “Rerum Novarum – Catholic Social Teaching“.

This teaching on social justice can also be seen in the 20th century with the rise of “Liberation Theology“, which was started by the Dominican Priest, Gustavo Gutiérrez Merino., who attempted to reinvent the gospel of salvation into a more earth-based, works based, salvation, which is not centered on salvation from the bandage to sin, and the wrath of God, but, instead, is centered in the troubles, and injustices, of the poor, wherein converts must work to save the world from the plight of poverty, and oppression.

Aspects of the “social justice” philosophy can be seen today, such as “The Collective Salvation of the Superior Group” mentality, which can be seen in fanatical religious groups, such as the New Apostolic Reformation, who have a strong emphasis on liberation theology, and even dominionism. Another would be IB’s “World Peace” Indoctrination, wherein student around the world are being taught how to be world citizens, who work together for world peace. Alice Bailey & The Christian World Servers are yet another example of this due to the fact that they claim to be working together for the good of mankind. In this way, All Roads Lead to Rome for the good of mankind, because all religions, and even Protestant leaders, are coming into union with Rome for this very purpose, and is building a dominate world church, which author, Brannon Hows calls a “Religious Trojan Horse“.

These radical views of communism, and “social justice” are rooted in Roman Catholic philosophers for the intentions of advancing the kingdom of Rome, and not the good of mankind. Though Rome promises peace, its goals are deception, and enslavement for the world, just as it enslaved the Holy Roman Empire. Those who are seducing, and deceived by its teachings, and false hope for world peace, will be greatly disappointed.

1    But concerning the times and the seasons, brethren, you have no need that I should write to you.
2    For you yourselves know perfectly that the day of the Lord so comes as a thief in the night.
3    For when they say, “Peace and safety!” then sudden destruction comes upon them, as labor pains upon a pregnant woman. And they shall not escape.

27     Then he shall confirm a covenant with many for one week; But in the middle of the week He shall bring an end to sacrifice and offering. And on the wing of abominations shall be one who makes desolate, Even until the consummation, which is determined, Is poured out on the desolate.”

1    Then one of the seven angels who had the seven bowls came and talked with me, saying to me, “Come, I will show you the judgment of the great harlot who sits on many waters,
2    with whom the kings of the earth committed fornication, and the inhabitants of the earth were made drunk with the wine of her fornication.”
3    So he carried me away in the Spirit into the wilderness. And I saw a woman sitting on a scarlet beast which was full of names of blasphemy, having seven heads and ten horns.
4    The woman was arrayed in purple and scarlet, and adorned with gold and precious stones and pearls, having in her hand a golden cup full of abominations and the filthiness of her fornication.
5    And on her forehead a name was written: MYSTERY, BABYLON THE GREAT, THE MOTHER OF HARLOTS AND OF THE ABOMINATIONS OF THE EARTH.
6    I saw the woman, drunk with the blood of the saints and with the blood of the martyrs of Jesus. And when I saw her, I marveled with great amazement.
7    But the angel said to me, “Why did you marvel? I will tell you the mystery of the woman and of the beast that carries her, which has the seven heads and the ten horns.
8    The beast that you saw was, and is not, and will ascend out of the bottomless pit and go to perdition. And those who dwell on the earth will marvel, whose names are not written in the Book of Life from the foundation of the world, when they see the beast that was, and is not, and yet is.
9    “Here is the mind which has wisdom: The seven heads are seven mountains on which the woman sits.
10    There are also seven kings. Five have fallen, one is, and the other has not yet come. And when he comes, he must continue a short time.
11    The beast that was, and is not, is himself also the eighth, and is of the seven, and is going to perdition.
12    “The ten horns which you saw are ten kings who have received no kingdom as yet, but they receive authority for one hour as kings with the beast.
13    These are of one mind, and they will give their power and authority to the beast.
14    These will make war with the Lamb, and the Lamb will overcome them, for He is Lord of lords and King of kings; and those who are with Him are called, chosen, and faithful.”
15    Then he said to me, “The waters which you saw, where the harlot sits, are peoples, multitudes, nations, and tongues.
16    And the ten horns which you saw on the beast, these will hate the harlot, make her desolate and naked, eat her flesh and burn her with fire.
17    For God has put it into their hearts to fulfill His purpose, to be of one mind, and to give their kingdom to the beast, until the words of God are fulfilled.
18    And the woman whom you saw is that great city which reigns over the kings of the earth.”

1    Now, brethren, concerning the coming of our Lord Jesus Christ and our gathering together to Him, we ask you,
2    not to be soon shaken in mind or troubled, either by spirit or by word or by letter, as if from us, as though the day of Christ had come.
3    Let no one deceive you by any means; for that Day will not come unless the falling away comes first, and the man of sin is revealed, the son of perdition,
4    who opposes and exalts himself above all that is called God or that is worshiped, so that he sits as God in the temple of God, showing himself that he is God.
5    Do you not remember that when I was still with you I told you these things?
6    And now you know what is restraining, that he may be revealed in his own time.
7    For the mystery of lawlessness is already at work; only He who now restrains will do so until He is taken out of the way.
8    And then the lawless one will be revealed, whom the Lord will consume with the breath of His mouth and destroy with the brightness of His coming.
9    The coming of the lawless one is according to the working of Satan, with all power, signs, and lying wonders,
10    and with all unrighteous deception among those who perish, because they did not receive the love of the truth, that they might be saved.
11    And for this reason God will send them strong delusion, that they should believe the lie,
12    that they all may be condemned who did not believe the truth but had pleasure in unrighteousness.