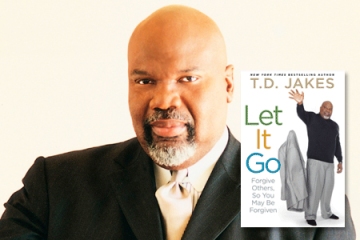 Pastor, televangelist, and motivational speaker, T.D Jakes, has released his new book entitled, Let it Go, which is causing some controversy, because of its confusing of the doctrine of original sin. The confusion is caused by Jakes’ explanation for the sin of unforgiveness, which is not based upon the teachings of Scripture, but instead, the philosophy of psychology. Psychology has always been noted by Christians for its denial of the reality of right and wrong by explaining concepts of morality as inventions of man’s subjective convictions of right and wrong, and ignoring the reality of a supreme being, who is the author of man’s universal sense of morality and ethics. In short, psychology denies the veracity of God’s universal law, which is taught in Scripture. Therefore, Jakes’ new book will serve to take the minds of his readers further away from the teachings of Scripture, and into the philosophies of the world, which is corrupt, due to its lack of understanding on the topics which they extensively teach on, such as the doctrine of sin.

Jakes’ teaching on the sin of unforgiveness is described below:

“We don’t come here unforgiving. Children are not unforgiving. You can punish them and they will hug you in a few minutes,”
“They can have an altercation with another child and want to go outside and play by lunch time.”
“[people] “come here with a certain propensity to be open, loving, accepting, and trusting. We learn to be unforgiving, doubtful, suspicious, guilt-ridden, and anxious.”
“”When people feel the urge to go against someone, then they should try to go the opposite direction of the emotion,”
“See, we are commanded to forgive [but] we are not commanded to trust. We wouldn’t be commanded to do something we can’t do.”

The biblical teachings on original sin are described within the passages below:

Romans 5
12    Wherefore, as by one man sin entered into the world, and death by sin; and so death passed upon all men, for that all have sinned:
Psalm 51
5    Behold, I was shapen in iniquity; and in sin did my mother conceive me.
Jeremiah 17
9    The heart is deceitful above all things, and desperately wicked: who can know it?
10    I the LORD search the heart, I try the reins, even to give every man according to his ways, and according to the fruit of his doings.
Genesis 8
21 …the imagination of man’s heart is evil from his youth
Romans 8
5    For they that are after the flesh do mind the things of the flesh; but they that are after the Spirit the things of the Spirit.
6    For to be carnally minded is death; but to be spiritually minded is life and peace.
7    Because the carnal mind is enmity against God: for it is not subject to the law of God, neither indeed can be.
8    So then they that are in the flesh cannot please God.
John 8
34    Jesus answered them, Verily, verily, I say unto you, Whosoever committeth sin is the servant of sin.
Romans 7
14    For we know that the law is spiritual: but I am carnal, sold under sin.
15    For that which I do I allow not: for what I would, that do I not; but what I hate, that do I.
16    If then I do that which I would not, I consent unto the law that it is good.
17    Now then it is no more I that do it, but sin that dwelleth in me.

Jakes’ departure from sound doctrine is not a new issue at all. For the last 20 years, he has been getting rich off of women who thought they were being taught Christianity, when in fact, Jakes was merely appealing to their emotions by teaching them pop-psychology. For the last 10 to 12 years, he has been justifying his millionaire status as a preacher by teaching the heresy of the prosperity gospel. These two doctrines reveal that Jakes is not at all a true teacher of the gospel, but a false teacher (Galatians 1:6-9). This fact is further made evident by Jakes’ life-long adherence to a false teaching on the trinity,  because a true teacher of the gospel of Jesus Christ should know exactly who Jesus is by reading the Bible.

Christians should not be led by these media personalities, because of their false teachings on the gospel. Instead, Scripture teaches that people like T.D. Jakes should be identified for the self-severing deceivers that they are, and should be avoided.

Romans 16
17    Now I beseech you, brethren, mark them which cause divisions and offences contrary to the doctrine which ye have learned; and avoid them.
18    For they that are such serve not our Lord Jesus Christ, but their own belly; and by good words and fair speeches deceive the hearts of the simple.