Christopher Hitchens, a slashing polemicist in the tradition of Thomas Paine and George Orwell who trained his sights on targets as various as Henry Kissinger, the British monarchy and Mother Teresa, wrote a best-seller attacking religious belief, and dismayed his former comrades on the left by enthusiastically supporting the American-led war in Iraq, died on Thursday in Houston.

The cause was pneumonia, a complication of esophageal cancer, Vanity Fair magazine said in announcing the death, at the M. D. Anderson Cancer Center. Mr. Hitchens, who lived in Washington, learned he had cancer while on a publicity tour in 2010 for his memoir, “Hitch-22,” and began writing and, on television, speaking about his illness frequently. 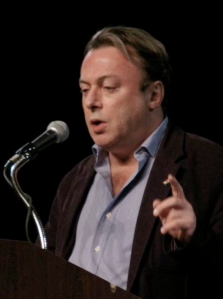 He took pains to emphasize that he had not revised his position on atheism, articulated in his best-selling 2007 book, “God Is Not Great: How Religion Poisons Everything,” although he did express amused appreciation at the hope, among some concerned Christians, that he might undergo a late-life conversion.

He also professed to have no regrets for a lifetime of heavy smoking and drinking. “Writing is what’s important to me, and anything that helps me do that — or enhances and prolongs and deepens and sometimes intensifies argument and conversation — is worth it to me,” he told Charlie Rose in a television interview in 2010, adding that it was “impossible for me to imagine having my life without going to those parties, without having those late nights, without that second bottle.”

In 2007, when the interviewer Sean Hannity tried to make the case for an all-seeing God, Mr. Hitchens dismissed the idea with contempt. “It would be like living in North Korea,” he said.

“I thought, even then, that he made excellent points which believers ought to face, that his book was worth a read for every believer.”

But what does the Bible say about this statement, as well as teachers like Mr. Hitchens?

Psalm 14
1 The fool has said in his heart, ” There is no God.” They are corrupt, They have done abominable works

Proverbs 1
7 The fear of the LORD is the beginning of knowledge, But fools despise wisdom and instruction.

Proverbs 14
7 Go from the presence of a foolish man, When you do not perceive in him the lips of knowledge.

Proverbs 26
1 As snow in summer and rain in harvest, So honor is not fitting for a fool.

John 17
17 Sanctify them in truth. Your word is truth.

2Timothy 3
16 All Scripture is given by inspiration of God, and is profitable for doctrine, for reproof, for correction, for instruction in righteousness,
17 that the man of God may be complete, thoroughly equipped for every good work.

2John 1
7 For many deceivers have gone out into the world who do not confess Jesus Christ as coming in the flesh. This is a deceiver and an antichrist.