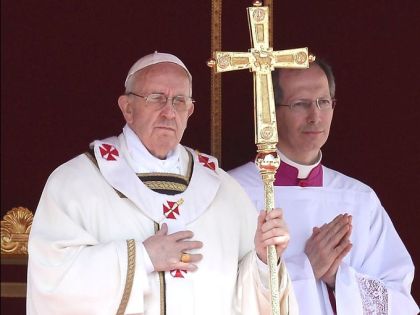 The media is making a big deal about the fact that the new pope is the first Jesuit pope ever to be elected. However, most people in the world are not understanding what they are being told, because most people are not familiar with the Jesuit order, and its history, which is entrenched in conspiracy, assassinations, deception, political, and religious, infiltration, bribery, and secret societies. The Jesuit order was started in 1540 by Ignatius of Loyola, and it has been the most feared, and, hated, Roman Catholic order of priests, because it is Rome’s military, central intelligence agency, inquisitors, theologians, and deceptive philosophers, to the world. The Jesuit’s goal is to bring the Protestant church, and the world, under the authority of Rome. The order’s means of accomplishing this goal is pure pragmatism, and ruthlessness, as stated below.

[The following is the text of the Jesuit Extreme Oath of Induction as recorded in the Journals of the 62nd Congress, 3rd Session, of the United States Congressional Record (House Calendar No. 397, Report No. 1523, 15 February, 1913, pp. 3215-3216), from which it was subsequently torn out. The Oath is also quoted by Charles Didier in his book Subterranean Rome (New York, 1843), translated from the French original. Dr. Alberto Rivera, who escaped from the Jesuit Order in 1967, confirms that the induction ceremony and the text of the Jesuit Oath which he took were identical to what we have cited below. â€“ A. N.]

When a Jesuit of the minor rank is to be elevated to command, he is conducted into the Chapel of the Convent of the Order, where there are only three others present, the principal or Superior standing in front of the altar. On either side stands a monk, one of whom holds a banner of yellow and white, which are the Papal colours, and the other a black banner with a dagger and red cross above a skull and crossbones, with the word INRI, and below them the words IUSTUM NECAR REGES IMPIUS. The meaning of which is: It is just to exterminate or annihilate impious or heretical Kings, Governments, or Rulers.

Upon the floor is a red cross at which the postulant or candidate kneels. The Superior hands him a small black crucifix, which he takes in his left hand and presses to his heart, and the Superior at the same time presents to him a dagger, which he grasps by the blade and holds the point against his heart, the Superior still holding it by the hilt, and thus addresses the postulant:

My son, heretofore you have been taught to act the dissembler: among Roman Catholics to be a Roman Catholic, and to be a spy even among your own brethren; to believe no man, to trust no man. Among the Reformers, to be a Reformer; among the Huguenots, to be a Huguenot; among the Calvinists, to be a Calvinist; among other Protestants, generally to be a Protestant; and obtaining their confidence, to seek even to preach from their pulpits, and to denounce with all the vehemence in your nature our Holy Religion and the Pope; and even to descend so low as to become a Jew among Jews, that you might be enabled to gather together all information for the benefit of your Order as a faithful soldier of the Pope. You have been taught to plant insidiously the seeds of jealousy and hatred between communities, provinces, states that were at peace, and to incite them to deeds of blood, involving them in war with each other, and to create revolutions and civil wars in countries that were independent and prosperous, cultivating the arts and the sciences and enjoying the blessings of peace; to take sides with the combatants and to act secretly with your brother Jesuit, who might be engaged on the other side, but openly opposed to that with which you might be connected, only that the Church might be the gainer in the end, in the conditions fixed in the treaties for peace and that the end justifies the means. You have been taught your duty as a spy, to gather all statistics, facts and information in your power from every source; to ingratiate yourself into the confidence of the family circle of Protestants and heretics of every class and character, as well as that of the merchant, the banker, the lawyer, among the schools and universities, in parliaments and legislatures, and the judiciaries and councils of state, and to be all things to all men, for the Pope’s sake, whose servants we are unto death. You have received all your instructions heretofore as a novice, a neophyte, and have served as co-adjurer, confessor and priest, but you have not yet been invested with all that is necessary to command in the Army of Loyola in the service of the Pope. You must serve the proper time as the instrument and executioner as directed by your superiors; for none can command here who has not consecrated his labours with the blood of the heretic; for “without the shedding of blood no man can be saved”. Therefore, to fit yourself for your work and make your own salvation sure, you will, in addition to your former oath of obedience to your order and allegiance to the Pope, repeat after me:

(He receives the wafer from the Superior and writes his name with the point of his dagger dipped in his own blood taken from over his heart.)

You will now rise to your feet and I will instruct you in the Catechism necessary to make yourself known to any member of the Society of Jesus belonging to this rank. In the first place, you, as a Brother Jesuit, will with another mutually make the ordinary sign of the cross as any ordinary Roman Catholic would; then one crosses his wrists, the palms of his hands open, and the other in answer crosses his feet, one above the other; the first points with forefinger of the right hand to the centre of the palm of the left, the other with the forefinger of the left hand points to the centre of the palm of the right; the first then with his right hand makes a circle around his head, touching it; the other then with the forefinger of his left hand touches the left side of his body just below his heart; the first then with his right hand draws it across the throat of the other, and the latter then with a dagger down the stomach and abdomen of the first. The first then says Iustum; and the other answers Necar; the first Reges; the other answers Impious. The first will then present a small piece of paper folded in a peculiar manner, four times, which the other will cut longitudinally and on opening the name Jesu will be found written upon the head and arms of a cross three times. You will then give and receive with him the following questions and answers:

From whither do you come? Answer: The Holy faith.

Whom do you serve? Answer: The Holy Father at Rome, the Pope, and the Roman Catholic Church Universal throughout the world.

Who commands you? Answer: The Successor of St. Ignatius Loyola, the founder of the Society of Jesus or the Soldiers of Jesus Christ.

Who received you? Answer: A venerable man in white hair.

How? Answer: With a naked dagger, I kneeling upon the cross beneath the banners of the Pope and of our sacred order.

Did you take an oath? Answer: I did, to destroy heretics and their governments and rulers, and to spare neither age, nor sex, nor condition; to be as a corpse without any opinion or will of my own, but to implicitly obey my Superiors in all things without hesitation or murmuring.

Will you do that? Answer: I will.

How do you travel? Answer: In the bark of Peter the fisherman.

Whither do you travel? Answer: To the four quarters of the globe.

For what purpose? Answer: To obey the orders of my General and Superiors and execute the will of the Pope and faithfully fulfil the conditions of my oaths.

Go ye, then, into all the world and take possession of all lands in the name of the Pope. He who will not accept him as the Vicar of Jesus and his Vice-Regent on earth, let him be accursed and exterminated.

The Jesuit oath provides a better understanding of the new pope, who was the head of the Jesuit order in Argentina. He was formerly known as  Cardinal Jorge Bergoglio, and has taken the name of Francis, after St. Francis of Assisi. The significance of this new name can be directly linked to the pope’s Jesuit oath, because the Franciscans were highly influential in the Great Inquisition of the 13th century, as stated below.

The Waldensians were mostly in Germany and North Italy. In contrast with the Cathars and in line with the Church, they believed in only one God, but they did not recognize a special class of priesthood, believing in the priesthood of all believers. They also objected to the veneration (not synonymous with worship) of saints and martyrs, which were part of the Church’s orthodoxy. The complaints of the two main preaching orders of the period, the Dominicans and the Franciscans, against the moral corruption of the Church, to some extent echoed those of the heretical movements, but they were doctrinally conventional, and were enlisted by Pope Innocent III in the fight against heresy. As a result, many Franciscans and Dominicans became inquisitors. For example, Robert le Bougre, the “Hammer of Heretics” (Malleus Haereticorum), was a Dominican friar who became an inquisitor known for his cruelty and violence. Another example was the case of the province of Venice, which was handed to the Franciscan inquisitors, who quickly became notorious for their frauds against the Church, by enriching themselves with confiscated property from the heretics and the selling of absolutions. Because of their corruption, they were eventually forced by the Pope to suspend their activities in 1302.

What can be expected of the new pope is the carrying out of the social teachings of Rome, such as “social justice“, which is a form of liberation theology that was taught by a nineteenth century Jesuit, and cummanitarianism, which is a merging of socialism and big business with big government. This agenda fits perfectly with Alice Bailey’s world servers idea, as well as Reformed Theologians’ “Incarnational ministry“. All of which are consistent with Vatican II, and promotes the ideals of liberation theology, ecumenism, and humanitarianism, and are rooted in the social gospel’s promise of making a better world. This agenda can be expected of the new pope because it has been consistent with the teachings of the Jesuits for well over a hundred years, and the goal of the agenda is global governance.