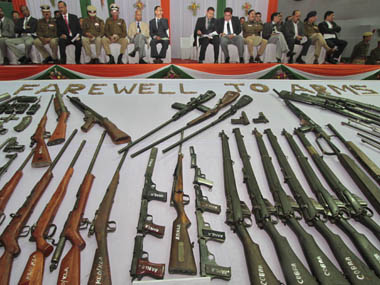 The 193-nation U.N. General Assembly on Tuesday overwhelmingly approved the first treaty on the global arms trade, which seeks to regulate the $70 billion business in conventional arms and keep weapons out of the hands of human rights abusers.

The National Rifle Association (NRA), a powerful U.S. pro-gun lobbying group that has opposed the treaty from the start, said it was a sad day for the United States, which joined the vast majority of U.N. member states by voting for the pact.

Iran, Syria and North Korea cast the sole votes against the treaty. The same three states last week prevented a treaty-drafting conference at U.N. headquarters from reaching the required consensus to adopt the pact.

The official U.N. tally showed 154 votes in favor, three against 23 abstentions, though diplomats and U.N. officials said the actual vote was 155-3-22. They said Angola was recorded as having abstained, though it had attempted to vote yes.

Iran, which is under a U.N. arms embargo over its nuclear program, is eager to ensure its arms imports and exports are not curtailed, while Syria’s government is embroiled in a two-year civil war and relies on arms from Russia and Iran, envoys said.

North Korea is also under a U.N. arms embargo due to its nuclear weapons and missile programs.

U.N. Secretary-General Ban Ki-moon welcomed the vote, saying the treaty “will help to keep warlords, pirates, terrorists, criminals and their like from acquiring deadly arms.”

The treaty will be open for signature on June 3 and will enter into force 90 days after the 50th signatory ratifies it. Mexican U.N. Ambassador Luis Alfonso de Alba told reporters it normally takes two to three years for a treaty to come into force, but said he hoped it would happen sooner in this case.

Major arms producers China and Russia joined Cuba, Bolivia, Nicaragua and other countries in abstaining. Although a significant number of countries abstained, putting the treaty to a General Assembly vote was the only way its supporters could get it adopted after the treaty conference collapsed last week.

Many of the countries that abstained, among them India, complained the treaty favored exporting over importing states. Russia said Moscow would take a hard look at the treaty before deciding whether to sign it.

Several delegates told Reuters the treaty’s effectiveness would be limited if major arms exporters refused to sign it.

The United States, the world’s No. 1 arms exporter, voted in favor of the treaty despite fierce opposition from the NRA, whose lobbying wing – the NRA Institute for Legislative Action – issued a statement condemning the U.N. vote.

“This treaty disregards the Second Amendment to our Constitution and threatens individual firearm ownership,” said Chris Cox, head of the NRA-ILA. “It is a sad, yet telling, day when the president of the United States and his administration refuse to defend America’s Constitution on the world stage.”

U.S. Secretary of State John Kerry said in a statement the U.N. adopted “a strong, effective and implementable Arms Trade Treaty that can strengthen global security while protecting the sovereign right of states to conduct legitimate arms trade.”

“Nothing in this treaty could ever infringe on the rights of American citizens under our domestic law or the Constitution, including the Second Amendment,” he added, referring to the U.S. Constitutional amendment that guarantees the right to bear arms.

The NRA has vowed to fight to prevent the treaty’s ratification by the U.S. Senate when it reaches Washington.

Syrian U.N. Ambassador Bashar Ja’afari repeated that his government opposes the arms trade treaty because it does not ban the sale of weapons to non-state actors and “terrorists” like those it says are active in Syria. The civil war there has claimed at least 70,000 lives, according to U.N. estimates.

The treaty does not ban transfers to armed groups, but says all arms transfers should be subjected to rigorous risk and human rights assessments first.

British Prime Minister David Cameron hailed the vote as a “landmark agreement that will save lives and ease the immense human suffering caused by armed conflict around the world.”

Mexico issued a statement on behalf of 98 U.N. member states saying, “an effective implementation of this treaty will make a real difference for the people of the world.”

U.N. member states began meeting on March 18 in a final push to end years of discussions and hammer out a binding international treaty to end the lack of regulation over cross-border conventional arms sales.

Arms control activists and rights groups have said a treaty was needed to halt the uncontrolled flow of arms and ammunition that they say fuels wars, atrocities and rights abuses.

The Arms Trade Treaty aims to set standards for all cross-border transfers of conventional weapons. It would also create binding requirements for states to review all cross-border arms contracts to ensure that arms will not be used in human rights abuses, terrorism or violations of humanitarian law.

“The agreement of the Arms Trade Treaty sends a clear message to arms dealers who supply warlords and dictators that their time is up,” said Anna Macdonald of the global development group Oxfam.

The main reason the arms trade talks took place at all is that the United States, the world’s biggest arms trader, reversed U.S. policy on the issue after President Barack Obama was first elected and decided in 2009 to support a treaty.