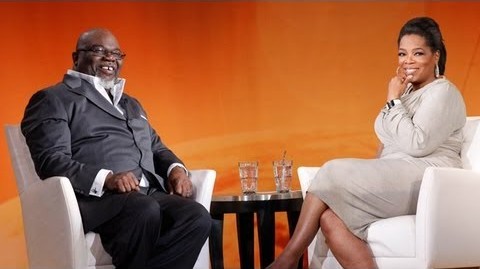 Longtime talk show host, actress, and philanthropist, Oprah Winfrey, is partnering with some of the biggest names in Christian media for her “life class“, wherein she teaches people how to live their best lives. Although Oprah has already made it clear that she doesn’t believe that Jesus Christ is the only way to God, she is now presenting herself as a Christian, and is partnering with well known pastors, who were never known for preaching the true gospel of salvation, to help her audience believe that living the Christian life is “one and the same” with living one’s best life. This means that sin, God’s righteousness, his judgment on sinners, repentance, and faith in Jesus Christ, is not mentioned in the classes. This deception is perpetrated by using Scripture out of context to affirm their messages of self-affirmation, self-exaltation, and self-reliance. Some of Oprah’s “life class” partners are T. D. Jakes, Rick Warren, and Joel Osteen.

Oprah’s “life class” reduces Christian living down to being positive for the sake of being happy, and successful in life.

Nevertheless, Jesus did not come into the world to give people the joys of this world, but to take the penalty of the sins of mankind on himself, which is death, and to rise from the dead, so that everyone who believes in him would be freed from the bondage to sin, from God’s judgment on sinners, to reconcile them to himself, and to give them eternal life. This is the gospel, and Christian living is not attainable to those who do not believe this. Also, salvation will not be found by those who, knowingly, hold back the truth of the gospel for the sake of being popular, and loved by the world (1John 2:15-17, Galatians 1:7-10). Therefore, Oprah, and her partners, are deceiving millions with their man-made, and man-centered, philosophies, and they, themselves, are under God’s eternal punishment.

15    Do not love the world or the things in the world. If anyone loves the world, the love of the Father is not in him.
16    For all that is in the world — the lust of the flesh, the lust of the eyes, and the pride of life — is not of the Father but is of the world.
17    And the world is passing away, and the lust of it; but he who does the will of God abides forever.
18    Little children, it is the last hour; and as you have heard that the Antichrist is coming, even now many antichrists have come, by which we know that it is the last hour.
19    They went out from us, but they were not of us; for if they had been of us, they would have continued with us; but they went out that they might be made manifest, that none of them were of us.

4    Now this I say lest anyone should deceive you with persuasive words.
5    For though I am absent in the flesh, yet I am with you in spirit, rejoicing to see your good order and the steadfastness of your faith in Christ.
6    As you therefore have received Christ Jesus the Lord, so walk in Him,
7    rooted and built up in Him and established in the faith, as you have been taught, abounding in it with thanksgiving.
8    Beware lest anyone cheat you through philosophy and empty deceit, according to the tradition of men, according to the basic principles of the world, and not according to Christ.
9    For in Him dwells all the fullness of the Godhead bodily;
10    and you are complete in Him, who is the head of all principality and power.

3    For though we walk in the flesh, we do not war according to the flesh.
4    For the weapons of our warfare are not carnal but mighty in God for pulling down strongholds,
5    casting down arguments and every high thing that exalts itself against the knowledge of God, bringing every thought into captivity to the obedience of Christ,

3    For this is the love of God, that we keep His commandments. And His commandments are not burdensome.
4    For whatever is born of God overcomes the world. And this is the victory that has overcome the world — our faith.
5    Who is he who overcomes the world, but he who believes that Jesus is the Son of God?
6    This is He who came by water and blood — Jesus Christ; not only by water, but by water and blood. And it is the Spirit who bears witness, because the Spirit is truth.
7    For there are three that bear witness in heaven: the Father, the Word, and the Holy Spirit; and these three are one.
8    And there are three that bear witness on earth: the Spirit, the water, and the blood; and these three agree as one.
9    If we receive the witness of men, the witness of God is greater; for this is the witness of God which He has testified of His Son.
10    He who believes in the Son of God has the witness in himself; he who does not believe God has made Him a liar, because he has not believed the testimony that God has given of His Son.
11    And this is the testimony: that God has given us eternal life, and this life is in His Son.
12    He who has the Son has life; he who does not have the Son of God does not have life.
13    These things I have written to you who believe in the name of the Son of God, that you may know that you have eternal life, and that you may continue to believe in the name of the Son of God.

14    For the love of Christ compels us, because we judge thus: that if One died for all, then all died;
15    and He died for all, that those who live should live no longer for themselves, but for Him who died for them and rose again.
16    Therefore, from now on, we regard no one according to the flesh. Even though we have known Christ according to the flesh, yet now we know Him thus no longer.
17    Therefore, if anyone is in Christ, he is a new creation; old things have passed away; behold, all things have become new.
18    Now all things are of God, who has reconciled us to Himself through Jesus Christ, and has given us the ministry of reconciliation,
19    that is, that God was in Christ reconciling the world to Himself, not imputing their trespasses to them, and has committed to us the word of reconciliation.
20    Now then, we are ambassadors for Christ, as though God were pleading through us: we implore you on Christ’s behalf, be reconciled to God.
21    For He made Him who knew no sin to be sin for us, that we might become the righteousness of God in Him.