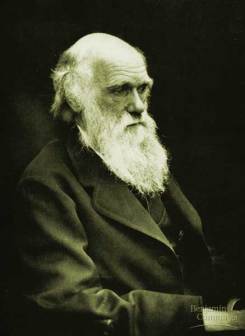 Charles Darwin’s theories were used as a philosophical tool for the works of eugenicists. Darwin, on the other hand, was a races who was not willing, according to his writings, to be a harden sociopath, such as Hitler. Nevertheless, his races philosophy was the fuel for Social Darwinists and eugenicists.

The quotes below shows Darwin’s, eugenics, philosophy of the preferred races over the savage races, as well as a desire to purify the preferred race from it’s weak, sick, and handicap members, which is consistent with the practices of Nazi Germany.

With savages, the weak in body or mind are soon eliminated; and those that survive commonly exhibit a vigorous state of health. We civilized men, on the other hand, do our utmost to check the process of elimination. We build asylums for the imbecile, the maimed and the sick; we institute poor-laws; and our medical men exert their utmost skill to save the life of every one to the last moment. There is reason to believe that vaccination has preserved thousands, who from a weak constitution would formerly have succumbed to small-pox. Thus the weak members of civilized societies propagate their kind. No one who has attended to the breeding of domestic animals will doubt that this must be highly injurious to the race of man. It is surprising how soon a want of care, or care wrongly directed, leads to the degeneration of a domestic race; but excepting in the case of man himself, hardly anyone is so ignorant as to allow his worst animals to breed.The aid which we feel impelled to give to the helpless is mainly an incidental result of the instinct of sympathy, which was originally acquired as part of the social instincts, but subsequently rendered, in the manner previously indicated, more tender and more widely diffused. Nor could we check our sympathy, even at the urging of hard reason, without deterioration in the noblest part of our nature. The surgeon may harden himself whilst performing an operation, for he knows that he is acting for the good of his patient; but if we were intentionally to neglect the weak and helpless, it could only be for a contingent benefit, with an overwhelming present evil. Hence we must bear without complaining the undoubtedly bad effects of the weak surviving and propagating their kind; but there appears to be at least one check in steady action, namely the weaker and inferior members of society not marrying so freely as the sound; and this check might be indefinitely increased, though this is more to be hoped for than expected, by the weak in body or mind refraining from marriage.

The great break in the organic chain between man and his nearest allies, which cannot be bridged over by any extinct or living species, has often been advanced as a grave objection to the belief that man is descended from some lower form; but this objection will not appear of much weight to those who, from general reasons, believe in the general principle of evolution. Breaks often occur in all parts of the series, some being wide, sharp and defined, others less so in various degrees; as between the orang and its nearest allies—between the Tarsius and the other Lemuridae between the elephant, and in a more striking manner between the Ornithorhynchus or Echidna, and all other mammals. But these breaks depend merely on the number of related forms which have become extinct. At some future period, not very distant as measured by centuries, the civilised races of man will almost certainly exterminate, and replace, the savage races throughout the world. At the same time the anthropomorphous apes, as Professor Schaaffhausen has remarked, will no doubt be exterminated. The break between man and his nearest allies will then be wider, for it will intervene between man in a more civilised state, as we may hope, even than the Caucasian, and some ape as low as a baboon, instead of as now between the negro or Australian and the gorilla.

Chris discusses an email recently received from a listener in England, who quoted from Charles Darwin’s “Descent of Man,” showing not only the racist implications of evolutionary theory, but the ominous and even deadly overtones of it. Can Darwin’s own words be refuted? Incredibly, evolutionists have attempted to do just that.

To listen to the program, click on the link entitled “THE DESCENT OF MAN“.