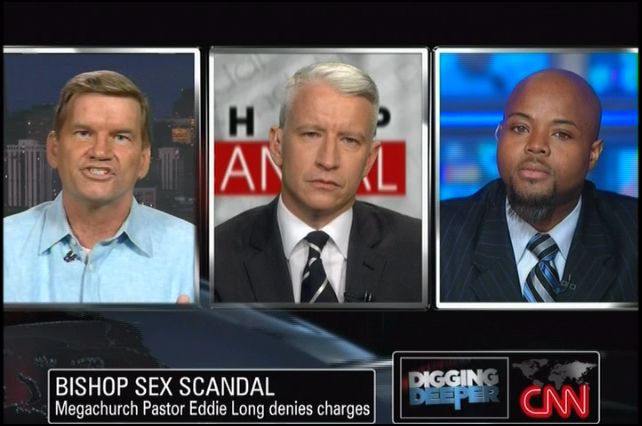 The photo above is a link to a debate on CNN with Gay Pastors, Ted Haggard and Troy Sanders. What makes these two “authors of confusion” are the two opposite extremes which they argue from. One extreme is Troy Sanders’ view which states, “all churches should come together and discuss their doctrinal differences for the sake of synthesizing their beliefs on sexuality and sin in order to hold ministers accountable for their acts of hypocrisy and liberate homosexuals from religious oppression, but to the exclusion of Scripture’s authoritative doctrine on the issue”. The other extreme is Ted Haggard’s which states, “every church is autonomous and therefore, has the right to determine their own doctrine, without the intrusion of any other church. And each church has the right to determine it’s own disciplinary actions for impropriety on the parts of its ministers. However, that discipline should be one that offers healing, restoration”.

Troy’s view forces all churches to accept the practice of homosexuality, and says that anything less is homophobia and homosexual oppression.

Ted’s view denies the reality of wolves among the sheep that should not be offered healing and restoration of any kind, but simply expelled from the fellowship as a false teacher.

What do they both have in common???

This debate is a tool for the conspiracy to bring about a universal religion, known to many as inclusivism, universalism, unitarianism, and coexistence. The method used by the media, in this chaotic debate, to help bring this new religion about is called, “the Hegelian Dialectic”. The Hegelian Dialectic is an interpretive method in which the contradiction between a proposition (thesis) and its antithesis is resolved at a higher level of truth (synthesis).  This is how it works:

What does the Bible have to say about coexistence???

According to Scripture, the concept of coexistence will be fully realized in “Mystery Babylon”. It will not only be a religious authority, but a civil authority over the rulers of the world. It will kill Christians, make the nations delusional in regards to understanding who the true God is, and it will be the economic capital over the world’s economy. This is the destiny of coexistence.

1    Then one of the seven angels who had the seven bowls came and talked with me, saying to me, “Come, I will show you the judgment of the great harlot who sits on many waters,
2    with whom the kings of the earth committed fornication, and the inhabitants of the earth were made drunk with the wine of her fornication.”
3    So he carried me away in the Spirit into the wilderness. And I saw a woman sitting on a scarlet beast which was full of names of blasphemy, having seven heads and ten horns.
4    The woman was arrayed in purple and scarlet, and adorned with gold and precious stones and pearls, having in her hand a golden cup full of abominations and the filthiness of her fornication.
5    And on her forehead a name was written: MYSTERY, BABYLON THE GREAT, THE MOTHER OF HARLOTS AND OF THE ABOMINATIONS OF THE EARTH.
6    I saw the woman, drunk with the blood of the saints and with the blood of the martyrs of Jesus. And when I saw her, I marveled with great amazement.
7    But the angel said to me, “Why did you marvel? I will tell you the mystery of the woman and of the beast that carries her, which has the seven heads and the ten horns.
8    The beast that you saw was, and is not, and will ascend out of the bottomless pit and go to perdition. And those who dwell on the earth will marvel, whose names are not written in the Book of Life from the foundation of the world, when they see the beast that was, and is not, and yet is.
9    “Here is the mind which has wisdom: The seven heads are seven mountains on which the woman sits.

10    There are also seven kings. Five have fallen, one is, and the other has not yet come. And when he comes, he must continue a short time.
11    The beast that was, and is not, is himself also the eighth, and is of the seven, and is going to perdition.
12    “The ten horns which you saw are ten kings who have received no kingdom as yet, but they receive authority for one hour as kings with the beast.
13    These are of one mind, and they will give their power and authority to the beast.
14    These will make war with the Lamb, and the Lamb will overcome them, for He is Lord of lords and King of kings; and those who are with Him are called, chosen, and faithful.”
15    Then he said to me, “The waters which you saw, where the harlot sits, are peoples, multitudes, nations, and tongues.
16    And the ten horns which you saw on the beast, these will hate the harlot, make her desolate and naked, eat her flesh and burn her with fire.
17    For God has put it into their hearts to fulfill His purpose, to be of one mind, and to give their kingdom to the beast, until the words of God are fulfilled.
18    And the woman whom you saw is that great city which reigns over the kings of the earth.”